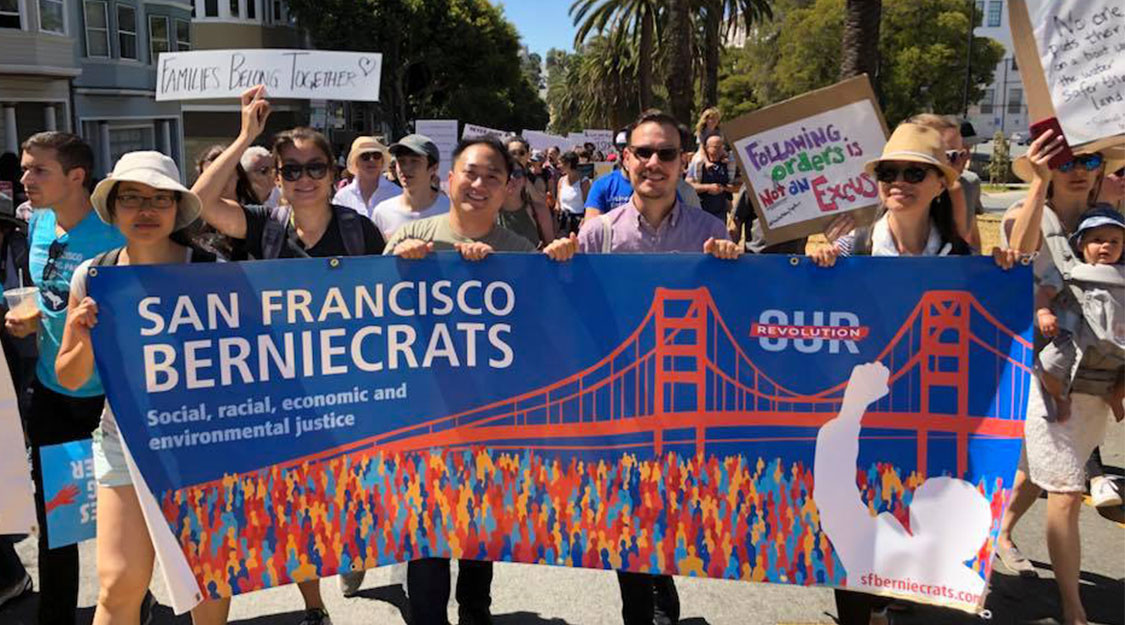 Bernie Sanders’ 2016 presidential campaign galvanized a lot of people across the country. Many in San Francisco poured in hundreds of hours volunteering and organizing for his presidential run, whether directly with his campaign or at the grassroots level. These included everyone from young folks who began political organizing for the first time, to hippies who had lost faith in our political system, to seasoned political activists who’ve been organizing for decades.

The San Francisco Berniecrats were formed with the aim of channeling the energy and dedication that surfaced from the Democratic Presidential Primaries into local politics in an organized, democratic manner. We held our first two meetings in July and August 2016 to vote on our name and bylaws. We elected to use the name “Berniecrats” because it signifies supporters who identify themselves with Bernie’s ideals and came together because of his 2016 campaign, but who are not bound to his every decision. It’s about We the People, not Bernie himself.

With the current outcome of the presidential elections, it is more important now than ever to push for real progressive values. We believe the extreme forces of the Right can only be defeated by a populist movement from the Left, not corporate centrists without vision. To us, resisting the current administration is important, but we have to do more. We have to offer real solutions to this broken system.

We welcome anyone who share Bernie’s vision in his campaign platform, regardless of party affiliation or the lack of it. We are a volunteer-run organization and a local affiliate of the national Our Revolution organization.

About the San Francisco Berniecrats

The San Francisco Berniecrats is a not-for-profit volunteer-run organization formed in 2016 aimed at furthering the goals of Bernie Sanders presidential campaign platform. We are a membership-based and non-partisan political club that does not take any money from corporations, candidates or campaigns. We’re focused on local grassroots organizing, because change begins locally. We operate “democratically”, meaning major decisions and endorsements are made only through a vote of our membership.

What have we done?

We vote on our club’s endorsements and print tens of thousands of SF Berniecrats Voter Guides every election cycle and hand them directly into the hands of San Franciscans. For those who liked Bernie, it‘s a great introduction to lesser known ballot measures and candidates. We are now mobilizing locally for the Bernie 2020 campaign.

NO is not enough. We have to offer real solutions to this broken system. So for the past 4 years, the SF Berniecrats have been fighting for Medicare for All,  for Affordable Social Housing and have been supporting the work of allied organizations in their fight for tenants rights, immigrants rights, and against police brutality. We’ve been volunteering countless hours to pass local ballot measures and to help elect grassroots candidates that will fight corporate money and power.

We are based in the city of San Francisco and welcome others to organize local chapters across the US. We are a local affiliate of the nation Our Revolution organization, and our local endorsements can influence their national endorsements. Here is our guide on how to start your own local progressive group.

Check out our events calendar for our next meeting!

Email us at [email protected]