All of our officers are democratically elected by the SF Bernicrats' membership. 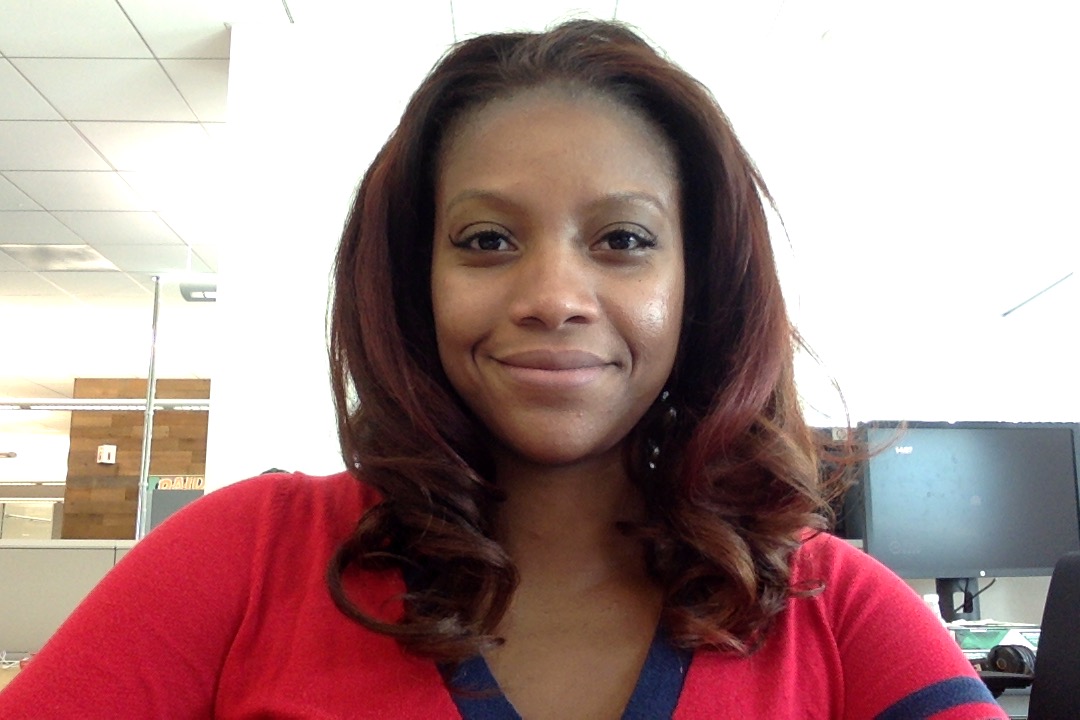 Janelle Jolley originally hails from the Washington, D.C. metro area, but has called San Francisco home since early 2016. It wasn't until Janelle left her job in tech, that she had the time and energy to become immersed in her community, politically. She became a Super Volunteer with the Bernie Sanders primary campaign in 2020 and had the time of her life! She got to work alongside such committed, passionate people in solidarity for a better future for us all. She is now host of What's Left To Do? as she explores how activists/organizers/everyday people are continuing the pursuit of building leftist political power, post-Sanders. 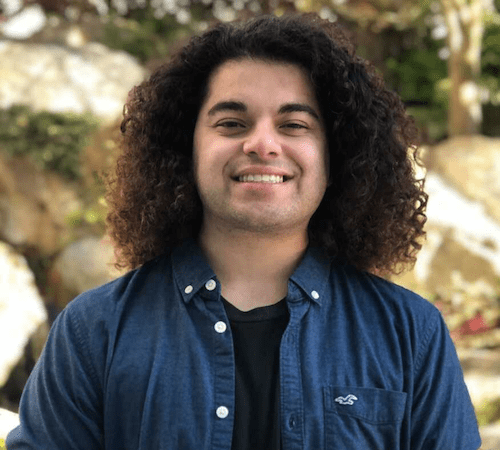 Born in Orange County, CA and raised by his mama and brother in a working-class family, Joshua grew up familiar with the struggles that working people constantly experience (housing insecurity, economic insecurity, mental health issues, etc.). Joshua identifies as Bisexual, Latinx, Native American, and Jewish.Joshua moved to San Francisco in 2017, attends San Francisco State University, and considers himself a “reborn SF native”. Joshua continues to be significantly involved in student government and advocacy for college students locally / statewide, especially on the issues of basic needs, college affordability, and empowering voices. He joined the San Francisco Berniecrats in 2018, and was elected to serve as the Election & Endorsement Coordinator in 2021. Now as co-chair, Joshua will continue to fight to expand our organization, connect with different campaigns, and ensure we’re supporting campaigns that are true to our progressive values! 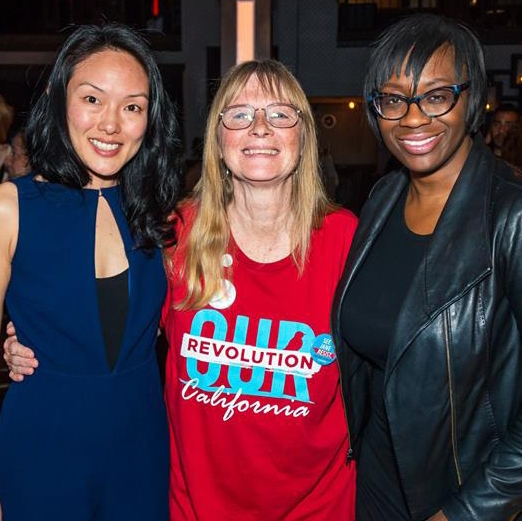 Immigrated from Peru at the age of 6. Retired public school teacher. Activist her adult life. Mother of two humans, three dogs. Joined the Berniecrats as a result of deep depression over the 2016 election. Currently a student at CCSF just for fun. Loves to read, walk her dogs, travel, hang out with her granddaughters, work in her garden, share a meal with friends, paint/draw and just about anything that she could not do when she was working full time, raising her kids. 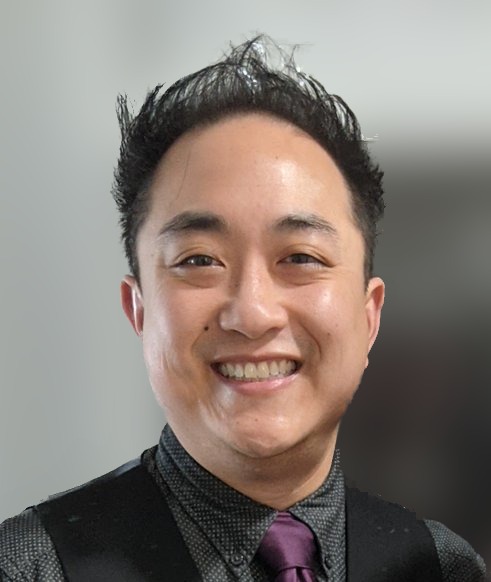 Hailing from the north suburbs of Chicago, IL, Adam first moved to California in 2008 to work in tech and engineering. But 2016 changed everything: we got an inexperienced idiot in office, but also a certain Bernard Sanders opened Adam's eyes to the huge gaps in progress even in our own San Francisco and how possible it was to accomplish this. Wanting to start making big changes fast, Adam joined the San Francisco Berniecrats in 2017 to find allies and even ran for District 4 Supervisor in 2018. This is the first time Adam will be serving as a Berniecrats officer, and his goal is to keep San Francisco well-informed on the elections we'll be facing in 2022 to truly be a progressive city, not only by reputation but by action. 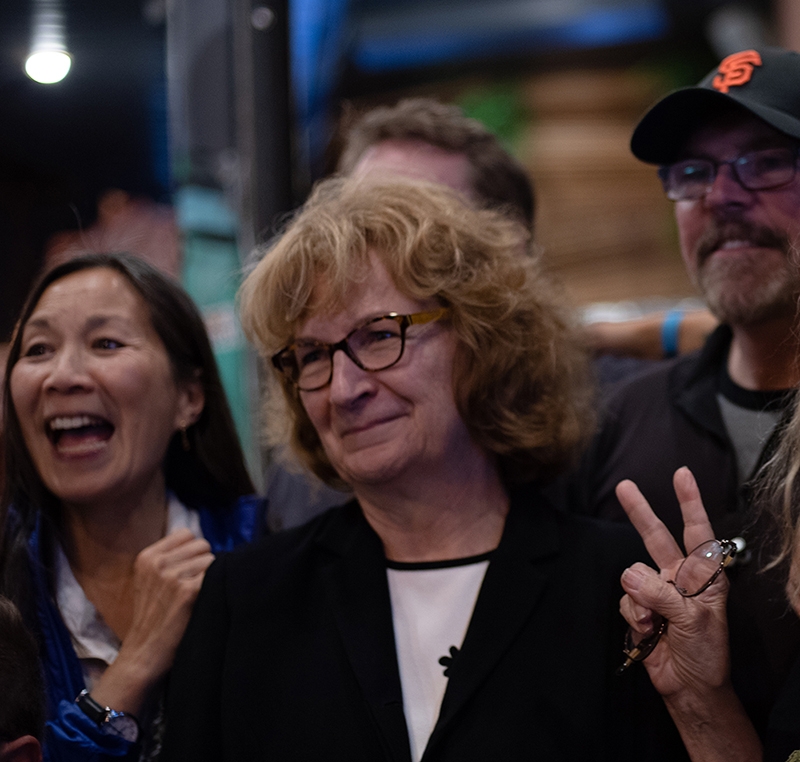 Mary grew up on a dairy farm in rural Ohio and immediately moved to San Francisco in 1975 after receiving a Bachelor of Science in Social Work from Ohio State. She funded her education by working at a drag strip, a sewing factory, Rubbermaid and a zoological library.

She never worked in social work, but instead began working in accounting. She had the honor of working as the Financial Manager for the first organic produce distributor which is women owned and operated and where famers were valued. She also worked as Accounting Manager for an engineering firm specializing in energy engineering and program management, involving contracts with the City and County of San Francisco, including the Department of the Environment.

Along with her best friend, she listened to Bernie on the Thom Hartmann radio show every Friday for many many years and visualized what it would be like to have a President that values the earth and every living thing on it and does not lie. Mary had never officially joined an organization or group until Bernie announced he was running for President in 2016 and was very excited for his 2020 run. 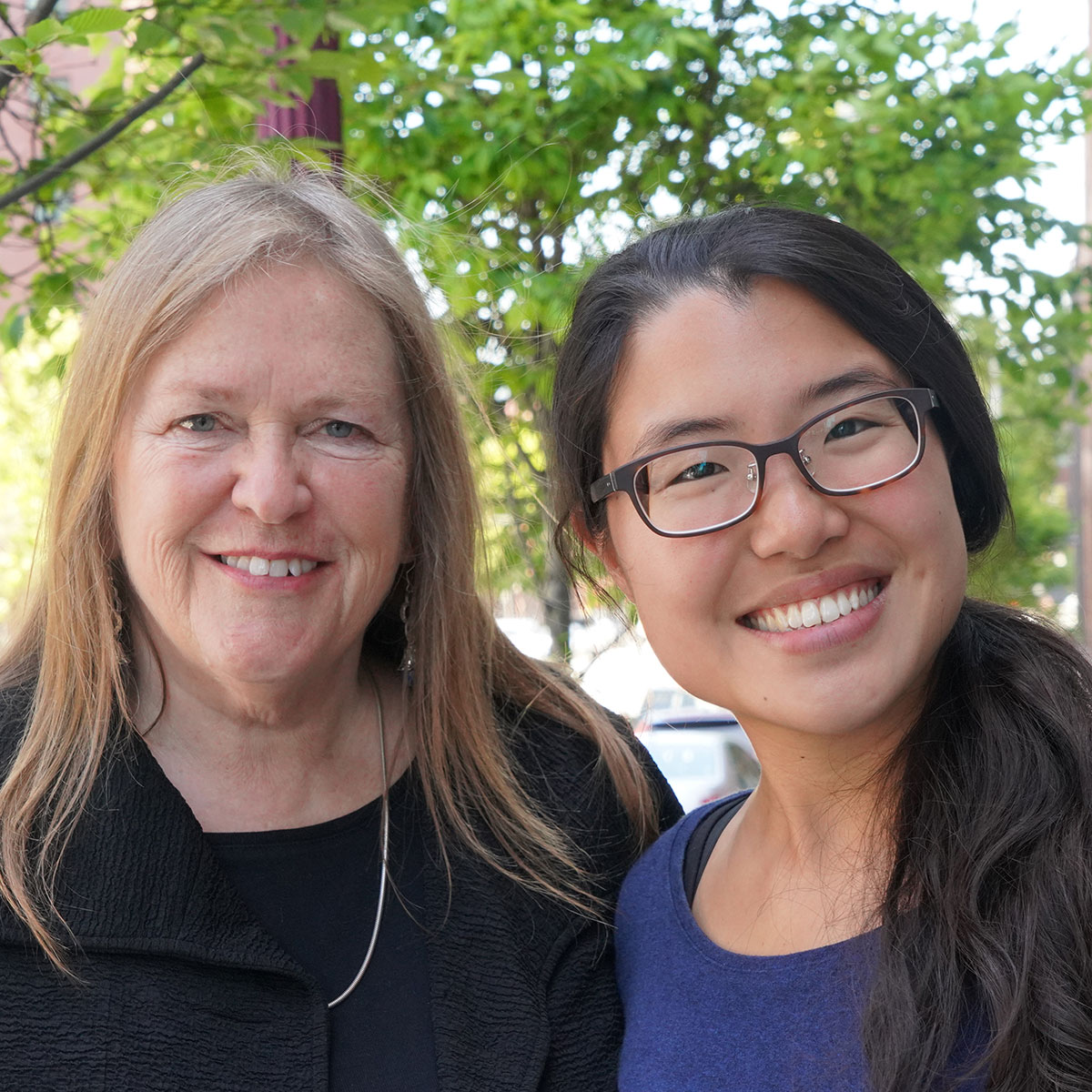 Claire is an artist, educator, organizer, and co-founder of the SF Berniecrats. Claire co-founded the club in 2016 to channel the energy of fellow super-volunteers for Bernie into local San Francisco politics. In 2018 Claire worked on the Jane Kim for Mayor campaign, and then for the Tony Kelly for Supervisor campaign. She took a break from the SF Berniecrats starting in July 2019, when she joined the Bernie 2020 campaign as the Bay Area Field Director. She was promoted to the Bay Area Director in January 2020, after the California primary, was redeployed to serve as the Deputy State Director for New York. Claire then worked on the No on Prop 22 campaign to fight against Uber, Lyft & other “gig work” tech corporations’ attempts to dismantle worker's rights. 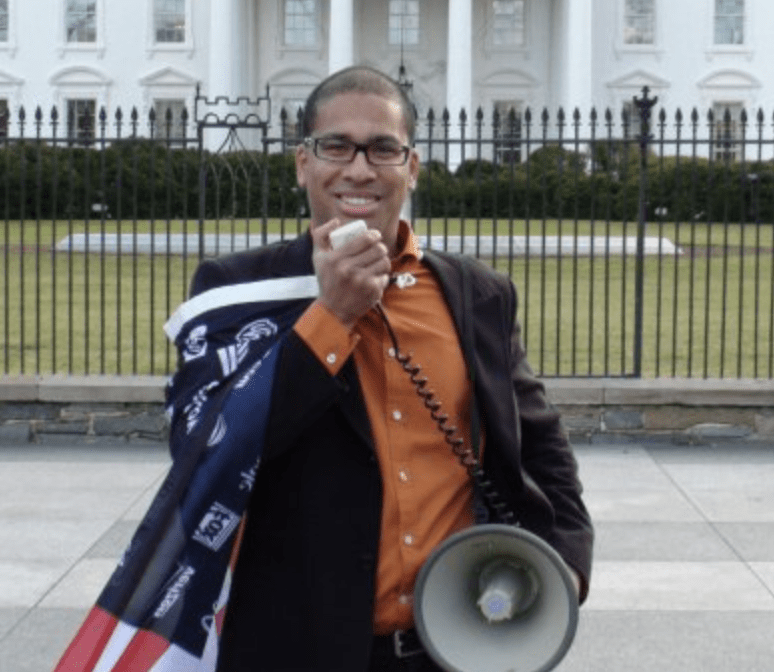 Brett is a journalist and essayist who writes for Common Dreams. His work, which focuses on issues of war and peace and human rights, has recently appeared at Salon, Truthout, Counterpunch, and elsewhere, including on the websites of progressive members of Congress including Barbara Lee, Ro Khanna, and Elizabeth Warren. He is a member of Collective 20, an international socialist/activist writer's group whose members include Medea Benjamin and Noam Chomsky. Brett is also a board member of the nonprofit advocacy group Ethics In Tech.
Born in Dallas, Texas, Brett grew up in New Jersey. After graduating high school, he moved to Florida, where he ran Division I collegiate cross-country and majored in political science at tiny Jacksonville University—at the same time as Kimberly Ellis! Since then, he has lived in Alabama, West Hollywood, Australia, Brazil, and Italy before moving to San Francisco in 2006. When not writing or railing against humanity's interminable injustices, Brett enjoys traveling, reading, collecting antiquarian books, and in one of his remaining guilty American pleasures, San Francisco Giants baseball. He is a proud Blaxican and District 5/Alamo Square/Lower Haight/Fillmore resident. 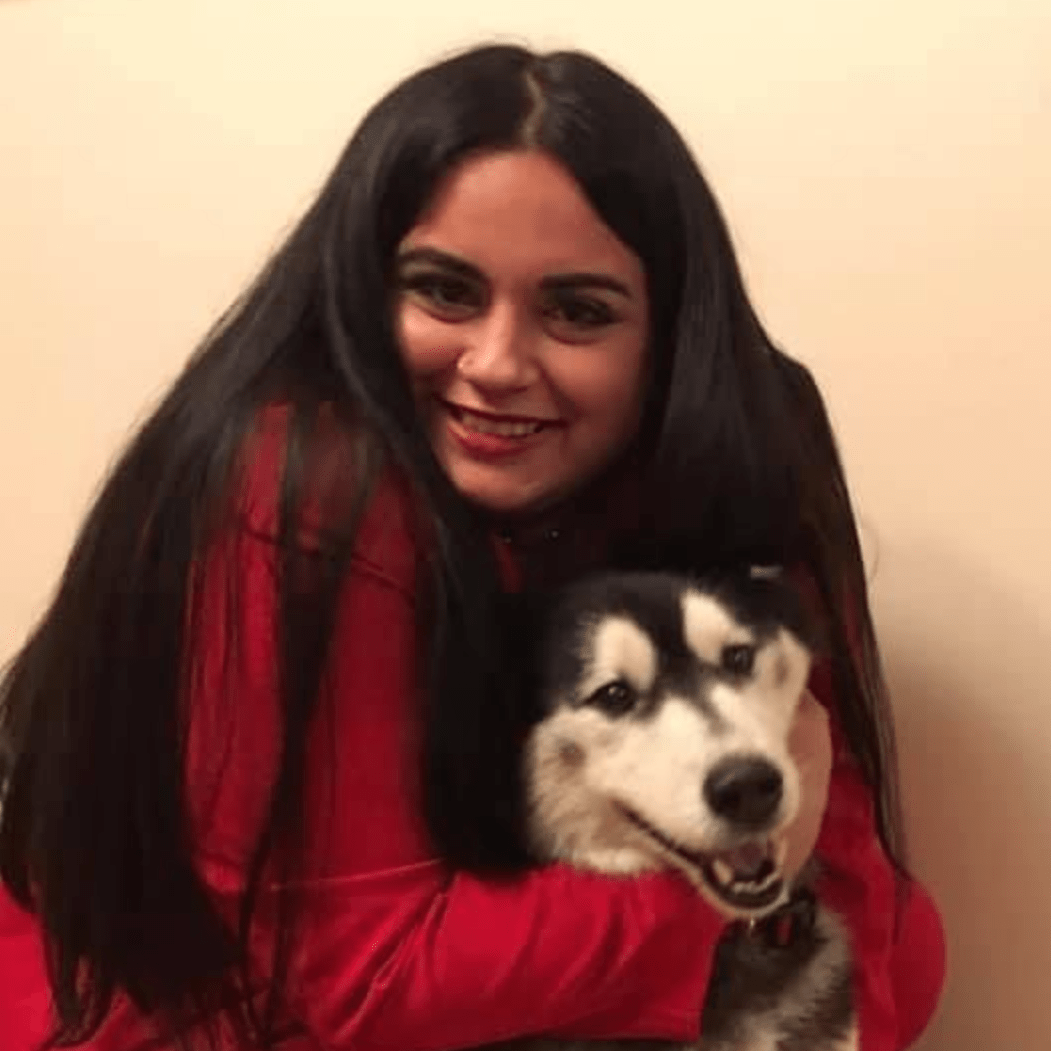 Alondra currently serves as a Financial & Data Analyst for the San Francisco Department of Public Health. Alondra is a 21-22 SF Fellow for the City and County of San Francisco. Her background as a student advocate throughout California advocating on higher education reform has inspired her to continue her advocacy at a local level advocating on women’s issues, electing women to public office, and getting youth involved in public service. As a daughter of immigrants, she believes it’s her duty to fight for a pathway to citizenship and help those who have historically been left out of the decision making table. She recently graduated from San Francisco State University with degrees in Political Science and Race & Resistance Studies.

Toby grew up in Albuquerque, New Mexico and always wanted to make an impact on climate change. He worked as an engineer on solar panels, high efficiency windows, and now batteries. Toby moved to the Bay Area for school and happened to watch at a Noam Chomsky film at the Roxie which kicked off his long journey to understanding the connections between environmental justice, healthcare, economic justice, and racial justice. He's volunteered for Dean Preston, Chesa Boudin, Measures K and L. He loves reading and basketball. 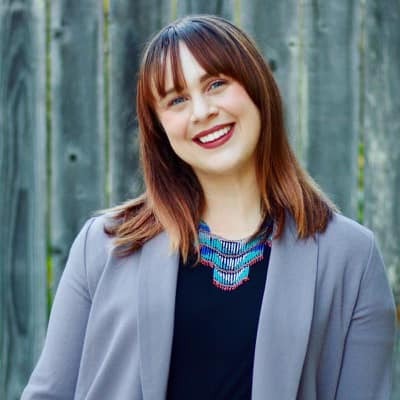 Rosa Shields was born and raised in San Francisco's Bernal Heights (District 9). She grew up in a union family, with a father as an organizer at Unite Here! Local 2 and a mother as an Eboard member of SEIU at Seton Medical Center in Daly City. Rosa is a proud product of the SFUSD public school system. When Rosa was six years old, her family was Ellis Act evicted from their apartment in Bernal; this was Rosa's first experience with the direct violence of gentrification.
Rosa's focus is to advance issues surrounding social justice in her community and takes inspiration from the women she was named after: Rosa Parks and Rosa Luxemburg. Rosa has worked as a union researcher, a campaign manager for Avalos for Supervisor, and currently serves union members in San Mateo County with wrap-around community resources.
Rosa was an active volunteer in the 2020 Bernie Sanders campaign and is excited to build bridges between the club and her beloved city of San Francisco. 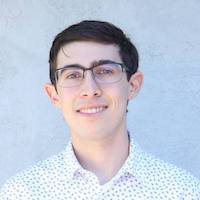 While studying at UC Santa Cruz, Steven helped organize Slugs for Sanders, a student group supporting Bernie 2016, and took an active role in the city-wide ‘Berniecrat’ organization, Santa Cruz 4 Bernie. During this time, he organized tens of phone-banking  and outreach events on campus and took a group trip with other passionate students to canvass for Bernie in Reno, Nevada during the primaries. He also helped flip several city council seats in Santa Cruz to progressives that year with the ‘Brand New Council’ campaign, by participating canvassing events, doing outreach, and by running their social media. After moving to San Francisco in 2017, he has become deeply involved in San Francisco progressive politics; volunteering for Jane Kim’s mayoral campaign, Prop C, and supporting the progressive ADEM slates in AD17 and AD 19, to name a few. He looks forward to continuing to build progressive power in San Francisco and elsewhere.
Cookie Consent
For analytics purposes, we use technologies like cookies to store and/or access device information. Consenting to these technologies will allow us to process data such as browsing behavior or unique IDs on this site.
Manage options Manage services Manage vendors Read more about these purposes
View preferences
{title} {title} {title}