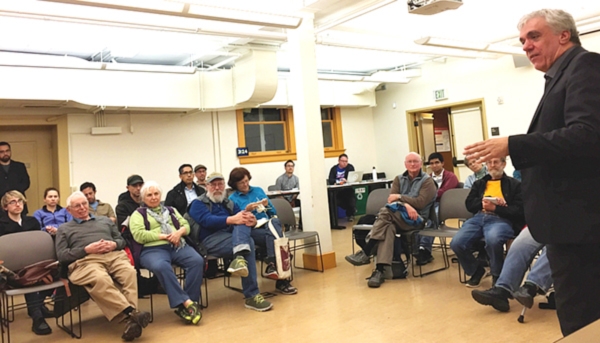 The SF Berniecrats voted unanimously to endorse Tony Kelly for SF District 10 Supervisor! Tony has been a neighborhood activist and organizer for 15 years, fighting for schools, parks, affordable housing, the homeless and environmental cleanup. He is the only major candidate who is not accepting corporate developer money, and is a member of the SF Berniecrats and Democratic Socialists of America.

As president of the Potrero Boosters, Tony lead efforts to save schools like Daniel Webster Elementary in 2006 and prevented public spaces like Starr King Open Space from become privatized in 2009. He co-created the city’s first Green Benefit District began operating in 2015. He’s been leading a coalition in the environmental cleanup of Bayview Hunter’s Point. For 10 years he has been working on efforts to create a public municipal bank in SF to fund affordable housing and resources for those left out of for-profit financial institutions. He has been pushing for more affordable housing out of developers, and has been working with the Coalition on Homlessness to ending family homelessness and increase funding for the arts through a hotel tax. He is also working with homeless advocates to create solutions for those on the street.

The SF Berniecrats are excited to support Tony Kelly, and look forward to volunteering for his campaign.